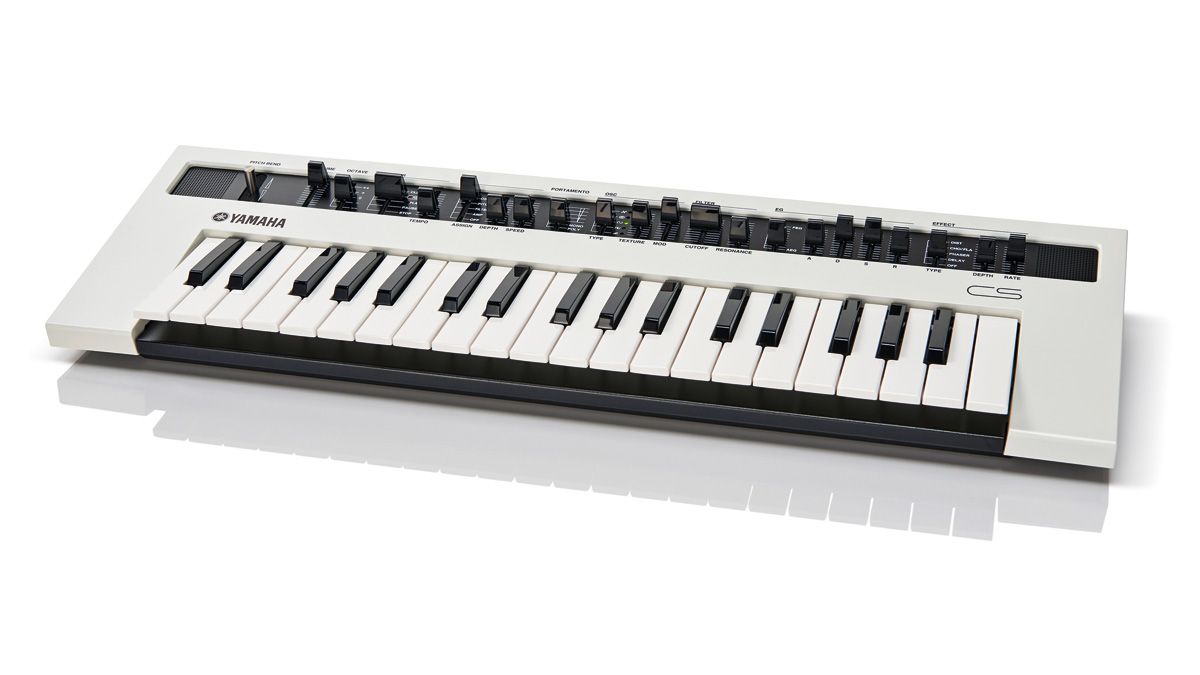 Walking into a local music store, a wonderful landscape of LEDs, bright screens, wires, and sleek buttons fill the synthesizer area. Amidst the bustling boxes and buzzes, this small, bright white miniature keyboard might seem out of place. The Yamaha Reface CS is a prime example of a manufacturer designing an accessible, approachable synth that is powerful enough to find a use even among heavier hitting more fully-featured synths. In an era of bedroom musicians and a recent boom of entry-level gear, the Reface represents a movement towards making music production accessible to everyone.

The main appeal of the Yamaha Reface CS, especially for those familiar with similar entry level synths, is the lack of menus and screens. While many synths offer simple programming through radio selectors, switches, and knobs, the entirety of the sound shaping is controlled by uniform faders along the top of the front panel. This gives the synth a unique tactile approach to shaping the sound, and allows people who play the synth to feel like they're adjusting the sound directly, in a similar but more physical way modulation is performed with midi knobs and x/y pads. This along with its clear labelling and intuitive layout help newer synth players develop a sense of how their decisions affect their sound.

The lineup of Reface synths from Yamaha gets dismissed as being 'toy synths' a lot by synth enthusiasts. While meant disparagingly most of the time, there is value to providing an experience that is easy to jump into. In many domains, simplified streamlined UI can create attractive applications for users, and serve in this case as an enjoyable way to explore creating synth sounds in a low-stress environment. This dismissiveness around the visual toy-like appeal of the Reface series only serves to prevent these designs from being explored.

There are downsides to the Reface CS in that intermediate and professional music producers often feel like a simpler synth won't get use in a high end studio. While this may hold true at the highest end of music production, for a large portion of amateur music producers, these newer entry level synths now provide a powerful enough sound engine and breadth of sound space to be used in their productions, as evidenced by musicians such as Crumb, Preoccuptions Nahre Sol (Nahre herself states that the portability and limited range of the reface CP has helped her creatively!)

There are two key traits that make a synth approachable: a low friction between playing the keyboard and creating pleasing and interesting sounds, and a clear and strong correlation between choice and change in the sound. The Reface CS does achieves both these goals; with a limited but intentional set of control options, its extremely easy to create usable interesting synth sounds, and intentionally tweak them to your desire.

It may seem like other entry-level synths should be comparably approachable, but looking at one of the Reface CS's peers, the MiniNova we can see that with the wider range of parameters, and the potential to make less immediately pleasing sounds, to a beginner synth player they may find themselves less engaged with the music making process. Comparing it to the next tier of synths such as the Prologue XD or Grandmother only exacerbates the problem further. In the world of popular synths, the Reface CS stands alone in its ability to immediately immerse players.

With the Reface CS, a new player can quickly and intuitively learn about basic synthesis right from the panel. All the controls are organized in a single row, and the flow from left to right mimics how an audio signal might actually be processed on an analog synthesizer (to an extent!). A beginner will naturally begin to compartmentalize different sections of the signal chain, and develop an intuition about how each effect interacts with the overall outcome of the sound. Users are encouraged to experiment individually with the oscillator type, envelope, effect, and LFO modules, without getting overwhelmed or intimidated by the options available, since each effect is controlled by at most two faders at a time.

The main issue I have with the layout is the placement of the LFO, placed to the left of the oscillator type. While it may have needed to be put there for technical reasons, it would've been nice to have it to the far right, though I understand how it follows logically that the LFO impacts the oscillator itself. Many software synths will allow you to attach an LFO to different parameters any any point of the signal flow, and so having it detached from the rest of the controls could make sense; however for someone who doesn't understand the purpose and utility of an LFO in other synths, it might seem like an odd position.

A lack of complex features is a common complaint given to the Reface CS (also more minute controls for components). However, from an educational perspective, the omission of concepts that relate to signal flow directly allows players to not feel like they are interfacing with audio signals or electrical system. Synthesis tools like parallel / serial filtering, and combining and routing multiple oscillators that are common to most fully-featured synths are notably missing. While it may feel limiting to the experienced user to not have these options available, the tradeoff in terms of simplicity may be worth it. Having most of the components affect the sound in a single straightforward way is an inviting experience for someone trying to learn synthesis. The Reface CS doesn't have no deeper features to explore either; one can learn a lot and explore the AEG-FEG envelope slider as evidence from this investigative post by reddit user ravenfrost1.

A second and more frustrating complaint of the Reface CS is its lack of preset sounds. For a performance and experienced user perspective, the lack of presets is a solid negative. Tools like Soundmodo struggle to emulate the convenience and performance of other most synths, and trying to rapidly change voices in a performance or recording scenario is clunky. As a new user, even though it's fairly easy to create interesting and usable sounds, it can feel intimidating to not have a source of presets to draw inspiration from and storage to return to sounds you've created. For those looking to get away from the feeling of menu diving and embrace a more hands-on form of sound design, this drawback will force you towards that style, while also helping you think more directly about what parameters are comprising the sound you're making. There are many happy owners that would prefer it no other way, and live and die with the lack of presets.

Some of the following criticisms of the Reface CS are true of many other entry level synths, but they're still worth mentioning!

Here are some takeaways that I've taken away from the Reface CS about designing entry level synths:

Thanks for reading! This is my first blogpost about music gear UX and design, please follow me if you'd like to read more!